Publication day  for The Trouble with Keeping Mum   is here but, sandwiched as it is between two launches, it is rather a non day.Though I say it myself, opening night in Orkney was a success – a case of wine, a friendly audience, and 70 copies of The Trouble with Keeping Mum sold. The transfer to Edinburgh is a work in progress, but as I am no longer the director or stage manager,  it shouldn’t concern me till curtain up. It really shouldn’t………….

With 12 days between launches, I have been enjoying being part of an audience – firstly watching the Olympic Eventing  cross country in the beautiful auditorium that is Greenwich Park with its panoramic views of the City of London. Although we are now a horse free family and no longer see £20 notes disappear into the hands of vets, saddlers and rug manufacturers, this was a horse lovers dream. We revelled in a rare family day out with our two daughters, complete with Union Jacks and a Silver Fern for our New Zealand links. We met up with Orkney friends with a German connection, so you could say our support got all three teams onto the podium -Team Germany taking gold, Team GB the silver and Team NZ the bronze. Bet they were glad we came. 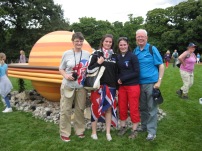 Yesterday, I went to Walton on Thames to watch the cycling. If pressing the camera shutter at the correct moment to catch a horse in mid air was difficult, achieving a photo of a cyclist was well nigh impossible. Bradley Wiggins went past at such a speed, far faster than those before or after him and it was obvious he was on course for victory. 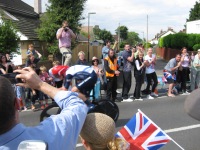 Today I am housekeeping and watching daytime television with a clear conscience. Not property, antiques or relationship angst, just dressage, rowing, swimming and even a bit of beach volleyball, but there is a bottle of bubbles in the fridge for later.